How to easily hack your Smart TV : Samsung and LG

Originally called “connected TVs,” and now they are called as “smart TVs”. Any television that can be connected to the Internet to access services, use apps and behave in some way as our computers with web browser. Smart TVs connect to Internet via wired Ethernet connection or Wi-Fi in a home network. Smart TVs require computer chips to juggle video processing, multiple screens and an Internet connection. They also use memory to buffer streaming video and music, and need additional processing power to deal with graphics. TVs can be controlled by voice commands and by apps running on some Smartphone.

Jitender Narula, information security solution and training expert of International Institute of cyber security explains that these Smart TVs are not that smart and the security of software isn’t exactly perfect. Smart TVs resemble the Internet of things (IoT) but old vulnerabilities which were considered to have completely disappeared are new vulnerabilities again in the Internet of Things (IoT). Sometimes you can easily find a flaw that can enable you to take a variety of actions on TV, including accessing potentially sensitive data, remote files and drive image and eventually gain root access to the device. 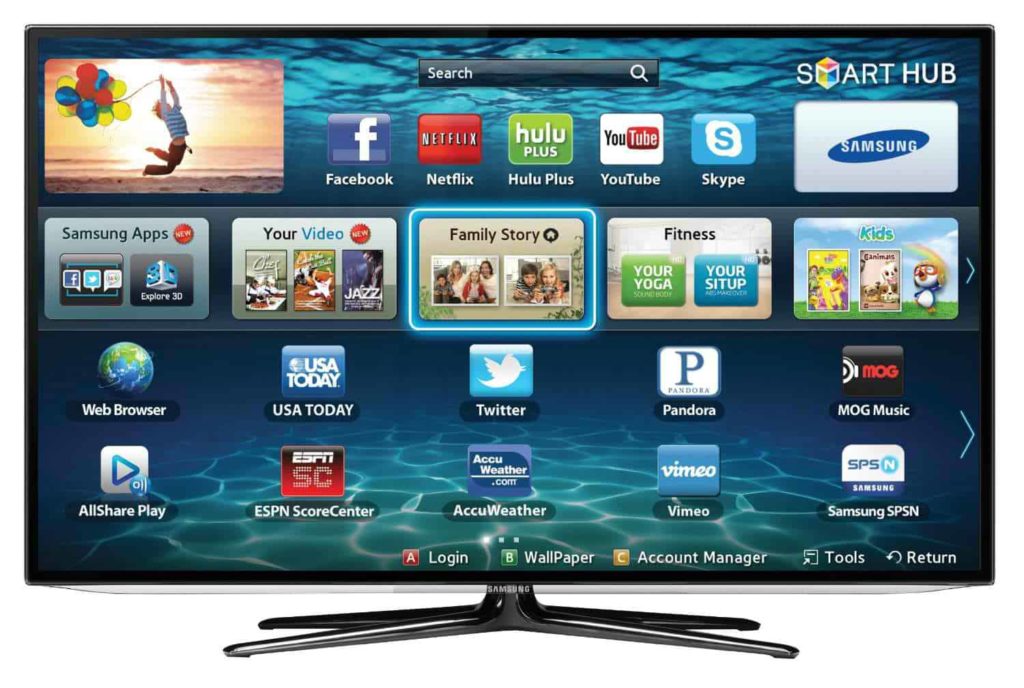 In the article we will be covering different aspects of two most famous brands of Smart TVs, Samsung and LG, with the help of ethical hacking course professor of IIcybersecurity.

Tizen is an operating system based on the Linux kernel and the GNU C Library implementing the Linux API. It targets a very wide range of devices including smart phones, tablets, in-vehicle infotainment (IVI) devices, smart TVs, PCs, smart cameras, wearable computing, Blu-ray players, printers and smart home appliances. Its purpose is to offer a consistent user experience across devices. Tizen would have been implemented in Samsung TVs from 2015.

There are some online communities which are working over the Samsung smart TV OS research like Sammygo, mentions Dan Reynolds, information security solution and training expert.

How to do analysis over Samsung Smart TV firmware

ExLink connector consist of a cable which has in one side a 3.5mm jack, like the audio ones, and on the other side an RS232 ( Serial ) DB9 connector. This cable will allow you to connect your PC computer to the TV, and enter in the Serial mode. With this you can use a serial Communications Software, like Hyperterminal, Putty from Windows or Linux.

The TV should now be ready for communication with your PC.

There is a Wireshark dissector for Samsung SmartTV protocol.

To install the dissector to your wireshark installation, you need to do the following actions:

Download version of WSGD that matches your wireshark version and machine architecture then put it into your wireshark plugins folder. Unzip dissector files (e.g. /usr/lib/wireshark/libwireshark0/plugins/).

To see dissector in action you could do this:

You can test the connection with some of the commands

Some models of Samsung TVs have an option, to make the TV work when they’re installed in hotels. This makes the TV to work in an isolated environment that protects some functions from the modifications hotel guests want to do. You can use the steps mentioned below to hack into hotel TV mode and root it.

When you buy a LG Smart TV you get a LG TV with WebOS operating system. WebOS, also known as LG WebOS, Open WebOS, HP WebOS, or Palm WebOS, is a Linux kernel-based multitasking operating system for smart devices like TVs and smart watches and was formerly a mobile operating system. Initially developed by Palm, which was acquired by Hewlett-Packard. HP made the platform open source, and it became Open WebOS. The operating system was later sold to LG Electronics.

As the WebOS is open source, there are some online open source communities like (openwebosproject, openlgtv) working over the firmware. From these communities you can download operating system firmware and do your own research.

First step towards hacking any system is to know about the system. To understand the architecture and monitor the traffic that your Smart TV is sending you will have to connect your computer with the Smart TV. To reach at the firmware level you will need to connect via RS-232C interface. You can easily connect using RS-232 cable from television to computer’s USB.

Start the TV and go to ‘Options’ menu by using remote control and consider Set ID is set to 1. You will need terminal emulation program such as Hyperterminal or Putty. Set the following configuration 9600 or 115200 baud (on recent firmwares there’s now 115200bps baudrate by default), 8N1, XON/XOFF. Data length: 8 bits, Parity: None, Stop bit: 1 bit, Communication code: ASCII code. By issuing following commands you can check the connection. There are a lot of different commands to play with the system.

[Set ID] : You can adjust the set ID to choose the desired set ID number in Option menu. Adjustment range is 1~ 99. When selecting Set ID 0, every connected set is controlled. Set ID is indicated as decimal (1~ 99) on menu and as Hexa decimal (0x0~ 0x63) on transmission /receiving protocol.

[DATA] : To transmit the command data. Transmit the FF data to read status of command.

[ ] : ASCII code space (0x20) * In this model, set will not send the status during the standby mode.

The set transmits ACK (acknowledgement) based on this format when receiving normal data. At this time, if the data is data read mode, it indicates present status data. If the data is data write mode, it returns the data of the PC computer.

The set transmits ACK (acknowledgement) based on this format when receiving abnormal data from non-viable functions or communication errors.

To control Power On/Off of the set.

* In a like manner, if other functions transmit ‘FF’ data based on this format, Acknowledgement data feedback presents status about each function.

* Note: In this model, set will send the Acknowledge after power on processing completion.

There might be a time delay between command and acknowledge.

Or you can use also use scripts available in Internet like libLGTV_serial. Mike Stevans, professor of ethical hacking course  explains that libLGTV_serial is a Python library to control LG TVs (or monitors with serial ports) via their serial (RS232) port.

You can easily hack your LG TV with an adruino card via uploading  scripts.

You can learn more about adruino hacks from Github projects and open source communities.

How to activate USB player via serial

You can download old firmware’s from official LG websites or for Internet forums. These firmware’s are customized as per user needs.

Mike Stevens, professor of hacking course in México explains that along with serial commands, scripts and along with vulnerabilities anybody can hack a smart TV. Some of the known vulnerabilities for which different exploits are available in black market are:

A hacker can hack and install malware through TV’s APIs like File.Unzip or Skype. These can be used to copy files to any writeable file system on the target and install a backdoor.

As per information security solution and training experts, creating malware for Smart TV is not so different from creating malware for PCs or Linux systems. The base OS is Linux and has vulnerabilities. Thus by using the serial commands and vulnerabilities a hacker can easily hack into a smart TV. Also as there are no anti-viruses or anti malware solutions available for smart TVs, thus it becomes easier for a hacker to hack into Smart TVs.